Ms. Maria Zannelli was honored at Xavier High School’s “Ignatian Educator Awards” on Monday, April 23, 2018. These awards recognize, thank, and honor teachers who played an influential role in the personal and intellectual development of a student.
Matthew Larson, The Epiphany School Class of 2017, wrote the following essay about his middle school math teacher Ms. Zannelli.

If you ask students what the most boring class is they are probably going to say Math, but in Ms. Zannelli’s class that was not the case. Ms. Maria Zannelli was my seventh and eighth grade mathematics teacher and my favorite teacher at The Epiphany School because she helped me excel in Math.

Ms. Zannelli was very helpful. During class she would go to each student individually as we were solving problems to make sure we all understood. She would check if we got the questions correct and if we didn’t she would give us hints or show us how to solve them. I remember that I had a hard time on a equation problem, so she showed me all the steps on the board until I finally understood. Ms. Zannelli always made herself available in the classroom and beyond. She always encouraged the class to reach out to her. If any of us had a hard time with the homework, all we had to do was send an email to Ms. Zannelli and she would respond.

I also liked Ms. Zannelli because she was funny. Ms. Zannelli would lighten up the class with jokes and made us laugh. This would keep the class involved and interested. Sometimes she would make jokes about the standardized test prep questions if they were really bad, which was something that most of my other teachers did notdo. Ms. Zannelli made the class realistic and funny.

The third reason that Ms. Zannelli was my favorite middle school teacher is that she engaged the class. Ms. Zannelli would send half the class to the whiteboard and have the other half of the class do the questions in their notebooks. Then she would have us alternate every five or six problems,. Ms. Zannelli assigned fun projects that helped me understand the material better. If I did not always understand the material very well, her projects would help me in a hands-on way. She also used different objects in the classroom to help us learn. I remember when we were learning geometry that she would take things in the classroom and have us measure them, like a tissue box, when we were learning about surface area. Ms. Zannelli also handed out cubes to everyone to figure out and explain volume.

Ms. Zannelli was helpful, funny, and interesting. Even though I’m no longer in her class I’m still influenced by what she taught me and I credit most of my math success at Xavier to her. 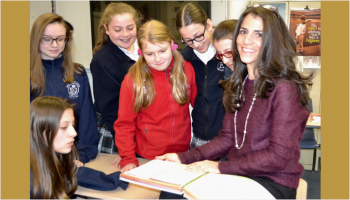 Due to the storm forecast, school is closed on
Thursday, February 18th.

The Epiphany School will have a “traditional snow day” tomorrow, Thursday,
February 18th. There will be no online instruction, and school will be closed.

The Epiphany School will remain closed on Tuesday, February 2, 2021 due to the continuing storm. There will no in-person or remote classes.
We expect to return to our normal schedule on Wednesday, February 3, 2021.
Stay safe, warm, and enjoy the snow day!

Due to the storm forecast, school is closed on
Monday, February 1st.

Due to the storm forecast, school is closed on
Monday,February 1st.