03/05/2019
The Epiphany 6th grade girls basketball won the Manhattan championship on Sunday, February 24, with a dramatic 27-21 victory over Saint Ignatius Loyola.  Epiphany and Loyola were the top two seeds in the bracket and had split games against each other earlier in the season.
The game was tight from the beginning as Epiphany jumped to an early lead only to be tied 4-4 at the end of the 1st quarter.  Epiphany pulled ahead at the end of the 2nd quarter 14-10 due to a combination of an aggressive 2-1-2 ‘21 Match’ defense and the flawless execution of a range of complex set plays including ‘Billiken’, ‘Reverse Billiken’ and the vaunted ‘Wolverine’.
Loyola clawed back in the 3rd quarter, even taking a brief 15-14 lead, before the quarter ended with at a 15-15 tie, setting the stage for a dramatic, heart stopping, epic 4th quarter for the ages.
In the 4th, the Epiphany girls simply wouldn’t be denied.  They rebounded with relentless aggression, played defense with passion, and made layups, jumps shots and free throws like calm, cool veterans.
In the end, the girls had their well deserved championship and earned the right to face off against the Bronx champion Saint Theresa on March 2. 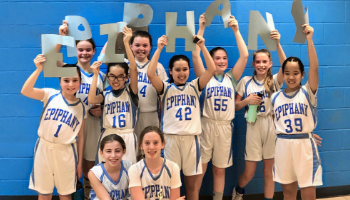